Chakria - Looking Up For The Victory 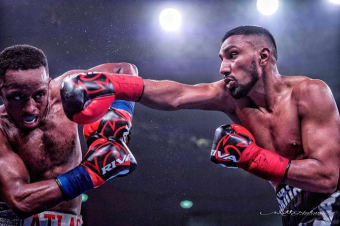 Chakria is all set to continue his fight for India with other nation. He is continuing his assault in Canadian Middleweight Division against a GTA rival Mikhail Miller (2–3–1) of Toronto at CCA centre in Brampton, Ontario.

Sukhdeep Singh is on the way of getting the fresh win of his young career. Singh has scored the sixth unanimous decision over Mitch Louis-Charles (5–2–2) (2KO’s) of Terrebone, Quebec. He had moved from India to Canada to begin his pro career in boxing. He is being praised by the fans on the basis of his excellent skills and talent in the white north.

Miller is a rugged opponent for any fighter. When he does lose, it’s rarely a wide margin. In January, Miller lost to Brantford’s Karl Hess (3-1-0, 2KOs) by split decision, earning a winning score on judge Martin Dalida’s card. In another close fight, judge Guy Girard had Miller battling Jean Michel Bolivar (6-2-0, 4KOs) to a draw, but the two scored the fight for Bolivar, resulting in a majority decision defeat for Miller.

If Singh has his way, however, there won’t be any close decision to deal with. “Like any fighter, I hope it’s a knockout,” said Singh. “We will take it round by round and I will pounce on my opportunities accordingly.”