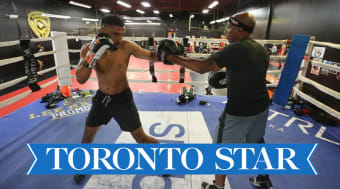 If Saturday’s bout unfolds according to his team’s plans, Ajax-based middleweight Sukhdeep Singh Bhatti (Chakria) will pummel Argentina’s David Ezequiel Romero before a sold-out crowd at Brampton’s CAA Centre, giving his growing fan base a reason to buy tickets in the future.

Bhatti grew up in Chakar, India, a small town in the heart of Punjab province, and relocated to Ajax last year to launch his pro boxing career. Showcasing him in Brampton, where nearly one in five residents lists Punjabi as their first language, gives the 26-year-old a tool as critical to boxing success as fast hands and punching power.

Bhatti’s rise highlights the evolving role race and ethnicity play in marketing fighters, and positions the undefeated boxer as a potential pioneer. No Indian-born boxer has ever won a professional world title.

In the past a fighter like Bhatti — one of a handful of South Asian fighters competing professionally in North America — might have been saddled with an explicitly racial nickname. The tradition spanned several generations, from fighters such as Nova Scotian legend Sam (The Boston Tar Baby) Langford in the early 1990s to Nigel (The Dark Destroyer) Benn in the 1990s.

But these days giving Bhatti a moniker such as The Brown Bomber might be considered offensive, even by pro boxing’s lax standards. The same goes for pitting fighters of different skin colours against each other, then profiting off racial tension among fans, says Bhatti’s promoter Tyler Buxton.

A race-baiting fight promotion can still make money — Floyd Mayweather and Conor McGregor milked the Great White Hope and Black Villain formula for a record payday in 2017 — but Buxton says he can’t force Bhatti into that template.

“It’s not New York in the 1930s. It’s not (as simple as matching) a Jewish guy against an Irish guy,” said Buxton. “I don’t think it’s the same anymore, and I don’t think Canada is that way.”

Bhatti uses the nickname Chakria, an homage to his hometown. Where his physical appearance marks him as South Asian in mainstream North American society, Chakria sends a specific message about his origins and the community backing him.